An offer of sanctuary at a friend’s house in the mountains north of San Francisco after the madness of awards season passes next spring, has reminded me of my home/property back in Colorado a few years ago. Two and a half acres on the west side of Pikes Peak, the tall one you see in the photos below, 35 miles west of Colorado Springs.

The reminisce began innocently enough, with a social media conversation about the weather. Eventually, I made the observation below, which is something I have said more than once over the years!

Was giving thought to the weatherman error rate, at least, in parts of the country that -have- weather.

When I lived in Colorado, for example. Forget that each mountain peak really can make its own weather. But consider the western slope, before systems hit the Continental Divide, or the plains, well east of the mountains. Those weathermen can see a system coming for what … 2 or 3 states? 😮

Or here, in Southern California, they have satellites now and can see the entire Pacific Ocean. But the 10 day forecast??!!! Don’t misunderstand me, I’m not saying it’s easy or implying in any way I could do better. That’s not what I do!

But what I am saying is that a similar error rate for a professional photographer, would be the equivalent of delivering every third or fourth photo to a client out of focus and improperly exposed! #amiright

The only complaint I had about the position of my house was that it was on the eastern slope of a mountainside. Which meant I had stunning views of Pikes Peak and the weather that would go off at the summit. But no western views of sunsets due to the mountainside behind the property.

I decided to take the spectacular rainbows to the east on summer evenings to be a good consolation prize though.

When the one below landed on my friend’s house, I requested a share from the pot o’ gold that simply must be there somewhere! It’s only fair compensation for showing them where it should be, don’t you think? 😉

And, no, these photos have not been retouched or filtered! #nofilter

Wildlife was on the property every day, from deer in the yard, to eagles overhead. Elk would wander through every now and then. A bear made a visit once in the dark of the night. Coyotes would howl down the valley. And those, deer? There was a corner of the property they liked so much that they would have their babies there each spring. Awwwwww ❤

These are just a few glimpses from throughout the first year I had the house. Seems I need to dig back into those photo archives a little more!

A mountain home in the Colorado Rockies.

A mule deer fawn at play in the Colorado Rocky Mountains.

Storm clouds in the evening light over Pikes Peak in the Colorado Rockies.

Rainbow in the Rocky Mountains of Colorado.

Hummingbirds feeding in the Colorado Rockies

Hummingbirds feeding in the Colorado Rockies 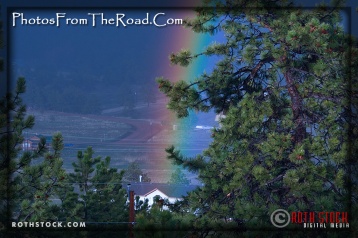 Pikes Peak after a winter snow storm in the Colorado Rocky Mountains.

One Reply to “A Post Awards Season Offer of Sanctuary”